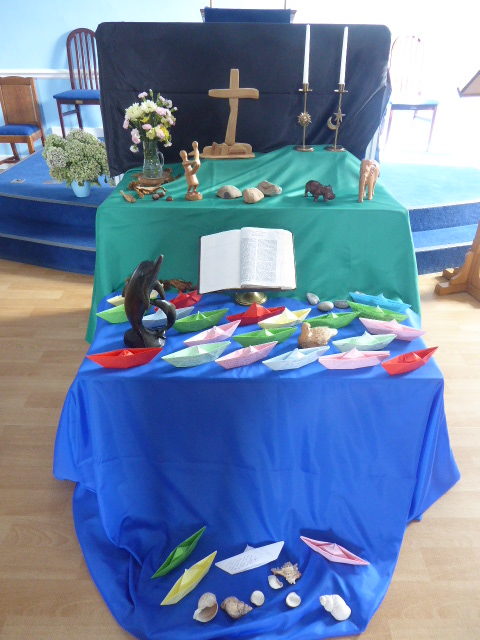 On Sunday 10th October Ardeen Road United Reformed Church, Doncaster held an Environment Service, when our focus was on God’s creation, and our place within it.

We used worship material, prayers and images from Christian Aid, the Joint Public Issues Team, and from Season of Creation resources.

The week before, on 3rd October, we had held our annual Harvest Service. The emphasis of the service was that of thanksgiving for all God’s gifts. The windows of the church had been decorated following a number of themes – Kelloggs, Harvest of Skills, Fruits of the Spirit, Fishers of Men, and Gardens – and there were additional harvest displays including a small display about climate change.

On the Saturday preceding the Harvest Service (2nd October) the Church was open to the local community for a couple of hours in the afternoon to view the displays, and to join us in free cakes and a cup of tea or coffee.

That afternoon, some of the young people helped to fold paper ‘prayer boats’ which were given to members of the congregation when they attended the Environment Service the following week. 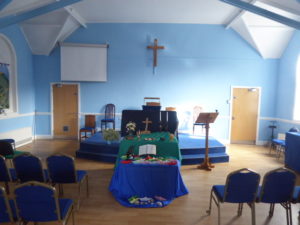 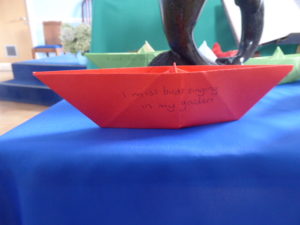 In that service the following week, the congregation was invited, during a time of quiet thought and meditation to the accompaniment of a recording of sounds of the natural world, to write on their prayer boats a prayer, or a comment, to show that they cared about climate justice.

They then brought their prayer boats to the front of the church to place them on the blue ‘sea’ part of the display. These then became our prayers of intercession for the day.

After the service, the prayer boats were packaged up and sent to Christian Aid to send on to COP26 to be part of the special installation being set up there by Christian Aid, along with thousands of boats from across the country, to deliver the Church’s prayers and messages to world leaders.